This blog post is based on Israel Finkelstein’s discussion about Omride architecture in The Bible Unearthed and this article.

Samaria was the capital for the descendants of the Iron I Israelite oil-and-wine communities. It was necessarily the primary capital of Israel-located on top of a strategic hill on the Shechem-Tul Karm road, defended well by the terrain, which made it near inaccessible for armies and good for control of the hill country while being close to the agricultural wonderland of the Jezreel. However, Samaria’s terrain is bad for keeping any large amount both foreign and domestic military forces. The royal enclosure of the Hill of Shemer had to be walled up with a casemate wall and filled with dirt to a depth of up to 20 ft. in order for there to be any kind of flat surface on top. A second capital would have to be constructed for military purposes: Jezreel.

Jezreel was a mighty walled rectangular enclosure surrounded by a moat and a casemate wall (not the best sort of fortification, but, then, the Omrides had no real enemies and a state to control), enclosing a total 11 acres. It had a six-chambered gate on its south side. There were several settlements before it (including one from the Early Iron IIA, probably founded by the pre-Omride Israelite monarchy), however, none were as well fortified as that of the Omrides. It was, being located on top of a commanding ridge, and was, therefore, used as a watchtower for traffic in and out of the Beth Shean Valley. A road connected it to Jenin, Ibleam, Dothan, and, through an arduous trek up and down a steep hill, Samaria. It was destroyed by Hazael, but, not too long after that, the site was reinhabited.

Hazor was also rebuilt under the Omrides (for chronology, see here and the two 2004 papers by Herzog and Singer Avitz). The city was extraordinarily small, located entirely on the west side of the old Upper City, but fortified with a casemate wall, with a citadel to the W. A moat was dug to the NE. and E. of the city (F&S, pg. 188). The six-chambered gate was built on top of a large fill to keep it more defensible.

Megiddo-Megiddo was not built by the Omrides, but, as Knauf concluded, was built in by the Omrides. While the city, a descendant of the early Iron IIA Megiddo VB (Shishak’s Megiddo) was unfortified, some kind of gate (whether the six-chambered one or not) was established there. A large Omride palace dominated the southern part of the city, and a mix of houses and palaces were built around the city’s perimeter. 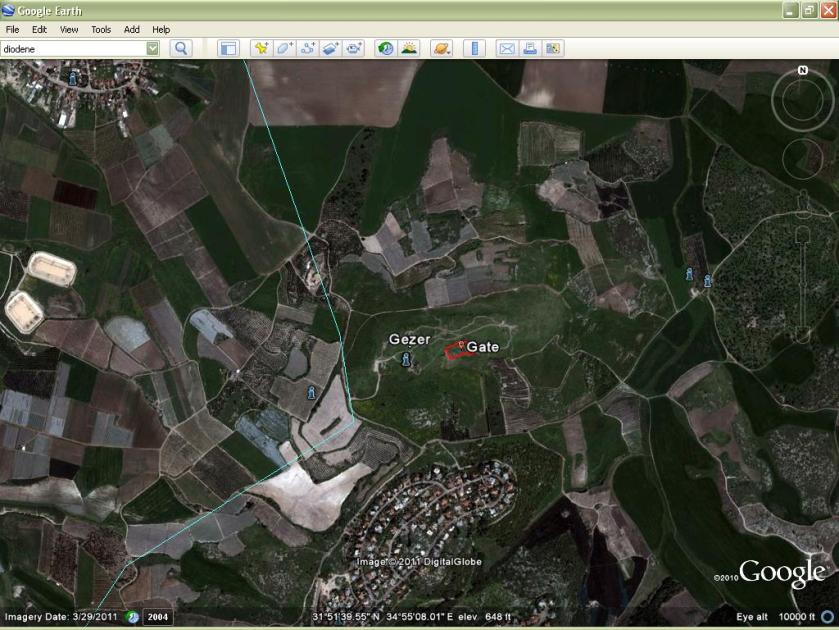 Gezer, too, was rebuilt under the Omrides (it had a tinge of “Ephraimite” influence in the 8th C BC-I would expect it to be in Omride hands). Like in the case of Hazor, the new city was far smaller than the old, and, unlike Hazor, probably not even a city, but a well-stocked military fortress. It had a six-chambered gate on its south end.

As for lesser-excavated sites mentioned by Finkelstein:

En Gev, on the E. shore of the Lake of Kinneret, is not yet well-excavated enough to show any but one sign of Omride architecture, but there is a clear possibility it could have been Omride.

Khirbet ‘Atarus, Mesha’s Ataroth, also provides clear indications of Omride architecture, having a moat on at least two of its sides. According to Finkelstein, an Iron IIa cult place was found there by a dig in 2002.

And, now, we come to the most impressive display of probably Omride fortress-making in Moab: Khirbet al-Mudayna on the Wadi et-Thamad! The most likely site for Mesha’s Jahaz (and, consequently, the Biblical Jahaz), the fortress was built on a high, oval hill (not well flattened by fills) and surrounded by a moat. A six-chambered gate (shown by the square) is visible in the NE. corner. It was peacefully captured by Mesha and the fortress continued in use into the early 8th C BC. It was re-founded in the reign of Josiah and was destroyed by the Babylonians.

This architectural pattern, devised by the first centrally organized state paying tribute to no one in all of Palestine’s history, was one which served as a foundation for the State of Israel. It made a separation between regular civilian cities (Shechem, Megiddo, Tell el Fara’ N.) and cities and citadels used by the government (which included moats, fills, casemates, large amounts of space not permanently occupied, and a very small amount of city gates (usually, as at Hazor and probably Gezer, one). The Omride state clearly had an interest in placing fortresses in rebellious areas and on strategic roads.

In the next installment, I shall analyze the Square Temple Mount and compare and contrast it with these Omride architectural parallels.