Naukratis/Naukratis, now Tell Nebireh, was a city of Egypt, its plan being as thus:

For other plans, see here and here. It lay on the east side of the Nile, and was apparently founded as a Phoenician settlement, as evidenced by its carved Tricanda shells (both undecorated and decorated), having a scarab factory dating to the reign of Psamtik II and Apries, but no earlier. This provide a lower anchor for Early Corinthian, found at Selinus c. 628 BC or just later, in the late 590s BC, since some sherds of this ware were found at Naukratis. However, a Corinthian Transitional sherd found at the site, plus some other pottery types dating mostly to the late 7th century may suggest the settlement existed before the construction of the scarab factory. The scarab factory apparently went out of use during the reign of Amosis, when, as Herodotus states, he gave the city over to the Greeks, establishing its place as the only Greek trading center in Egypt. As Peter James suggests, this may have been so because of the Chaldean conquest of Tyre and the loss of Egyptian opportunities to ally with Phoenicia. Naukratis remained an important city of the Greeks, Nectanebo I setting up a stele there, becoming semi-autonomous during the time of Alexander, stretching into the Byzantine era, when it was abandoned.

Rehov.org, that great site detailing the excavations at the Tell, is down.

Area A is the acropolis.

Bethel was a city visited by Abraham twice and Jacob three times. It was the residence of Jacob during his third visit there, Jacob there being named “Israel”, Deborah being buried here. It was an existent city at the time of Joshua, being captured by him and listed in the Benjamin town list. In Judges, Bethel is struck with the edge of the sword by Ephraim and houses the Ark of God, apparently during the lifetime of Shiloh. It was existent when Saul was made king. An altar was built at Bethel and at Dan for a god represented by a golden calf by Jeroboam I. The calf continued to exist throughout the days of the Kingdom of Israel. A small Assyrian-era YHWH-ist priesthood existed there until its cultic structures were destroyed by Josiah. No further mention of it is made until the Persian period.

The Archaeological History of Beitin (from Finkelstein):

Settled intensively in the Middle Bronze, and existent in LB I and IIA, Beitin became the best-fortified city in the Hill Country in LB IIB. It did not survive into LB III, but was re-inhabited during the Iron Age, its first two Iron I phases being destroyed, and its Middle Iron I stratum (the one contemporary with the habitation of Shiloh) did not survive into Late Iron I, when Jerusalem was well-occupied once again. It did not bear any distinctive Early Iron IIa (Jeroboam I era) ware, revealed a poor settlement from the Late Iron IIa, reached a peak of prosperity under the dynasty of Joash, and continued to exist after the fall of Israel, albeit in a state of decline, until it was destroyed, probably by the Babylonian conquest. It contained no building remains and almost no pottery remains of the Persian period.

In short, the scheme fits, even for the Exodus and Patriarchal era, except for the Persian gap (found at plenty of other sites as well) and the fact there is no great Early Iron IIa occupation (probably true at Dan as well). However, there is no indication of the cultic importance of Beitin in the archaeological record. In short, archaeological evidence neither confirms nor denies Robinson’s identification of Beitin.

2. Don’t make claims which are clearly not true.

3. Cite experts in their proper field.

Khirbet Qeiyafa is a site which:

2. Has its two four-chambered gates facing to the south and west.

3. Does not contain pig bones.

4. Is out of context with the rest of Judah and Israel, which show only Canaanite and Philistine city-states in its days (Late Iron I), and, perhaps, a city-state of Jerusalem.

It is probably to be attributed to an Elah Valley polity ruled from Socoh or Azekah. Its identification as Shaarayim is appealing (it does have two gates!) but suspect; it seems to have been viewed by the Deuteronomistic Historian as a site existing in his day, being mentioned as having a road leading to it and being in a late 7th C BC town list. As Todd Bolen has pointed out, there are other improbabilities with this identification. Todd’s identification of it as Ephes-Dammim (the only other proposed identification that is plausible) is speculative, but possible.

According to “The Excavation of Gezer“‘s discussion of the find-spot of the Gezer Calendar, it is stated the Calendar was found in the northern part of Macalister’s Trench 8. Looking at this reconstruction of the Omride (“Solomonic”) fortress, Trench 8 (see Excavation of Gezer, Vol. 3) is east of the Omride fortress. Also according to Macalister, the calendar was found in “Fourth Semitic Debris”, apparently of Iron I (Macalister originally dated the Omride Fortress to the Hellenistic Period and the Calendar to the 6th C BC) This would seem to support the Low Chronology of Iron Age pottery and the high chronology of Iron Age inscriptions.

From the debate which went on here two days ago, I can tell three things.

1. TaylorX04 has not read my review of his video.

2. Taylor X04 is not citing Hoffmeier for his 15 miles claim-he is citing an outdated version of my very own AJaL. My present claim would be in the range of 7-17 miles (depending on direction). 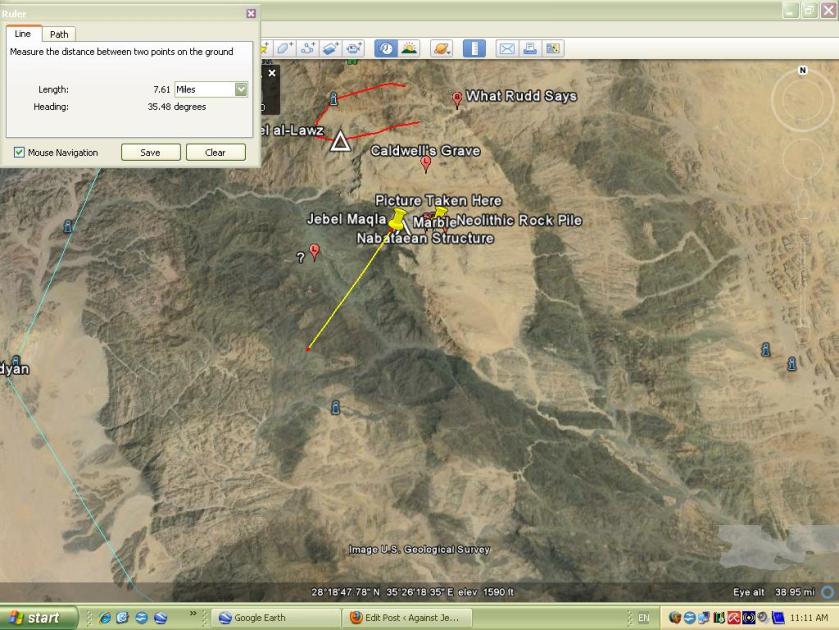 3. sawerag has not read AJaL, nor does he understand the distinction between Jebel Maqla (the blackened peak which is called Jebel al-Lawz by all so-called “Lawz proponents” except the Caldwells) and Jebel al-Lawz proper (which the Caldwells consider to be Horeb, not Sinai).

Throughout my studies, I have found that it only makes sense to identify an ancient site if one is either certain (Jerusalem, Gezer, Beth-Shean, Rehov, Ashdod, Hazor, Gibeon, Arad, Joppa, Jezreel, Lachish, Mareshah, Dor, Tyre, Byblos, Hamath) or reasonably certain (Megiddo, Shechem, Ashkelon, Gath, Ekron, Shiloh, Dan, Azekah, Hebron, Bethsaida, Beth-Shemesh, Mizpah) about its identification. I consider the identification of Tel Batash as Timnah, for instance, to be reasonably certain due to the fact it fits all the data we have and no one has suggested a better candidate. I consider the identification of Jericho, meanwhile, to only be considered probable, however, no one has come up with a better candidate, and the identification of Jericho might be considered by some to be reasonably certain. I would not think of naming et-Tell as Ai or Tell el-‘Farah N. as Tirzah when writing about archaeological matters. This is largely due to my wish to be wrong as little as possible. I still find it more acceptable to refer to Tell Deir Alla by its modern name then as Succoth, and might possibly consider naming Khirbet Mediniyah on the Wadi Thamud as Jahaz.

This opinion has been strengthened by my reading of Peter James (no Velikovsky)’s papers, which stress the limits of our knowledge about pottery chronology and ancient sites and question our universally accepted axioms quite frequently. He is, in fact, my inspiration for adding the extra paragraphs to my “Iron Age” page. I still, however, find it reasonably certain Shoshenq is to be identified as Shishak and likely that the Conventional Chronology is predominantly correct.

This brings me to the matter of Byzantine Bethel. So far, no certain proof has been shown regarding the location of Iron Age Bethel. It has only been shown by Judges 21:19 to have been on the Jerusalem-Nablus road and by Joshua‘s boundary description as being north of Michmash and Tell en-Nasbeh (very likely Mizpah). There has been quite some debate regarding whether it is to be identified with el-Bireh or with Beitin.

According to Eusebius and Jerome, Bethel lay on the east side of the road, 12 miles from Jerusalem. Also, according to Jerome, Ophrah lay both at the 21st milestone and 5 miles east of Bethel (i.e., at the 18th or 17th milestone). Since el-Bireh, the only candidate for Bethel besides Beitin, is between the tenth and 11th milestones, while Beitin is located closer to the 13th milestone than the 12th, neither of them fit Eusebius and Jerome’s data well, however, Beitin is clearly closer to the 12th milestone and had many churches before their demolition by the Muslims in the 19th century. Also, if Ophrah is to be identified as et-Tayyibeh, as identified by most, or Dayr Jarir, or even Ramun, there is no debate as to the identification of Byzantine Bethel as Beitin.