A phenomenon of square and circular geoglyphs dating to the 1st-2nd millennium AD has been revealed by means of deforestation and aerial photography in the past decade. News reports on discoveries of this phenomenon can be found here, here, here, and here. An article on this phenomenon is here.

A screenshot of the area where the geoglyphs are found: 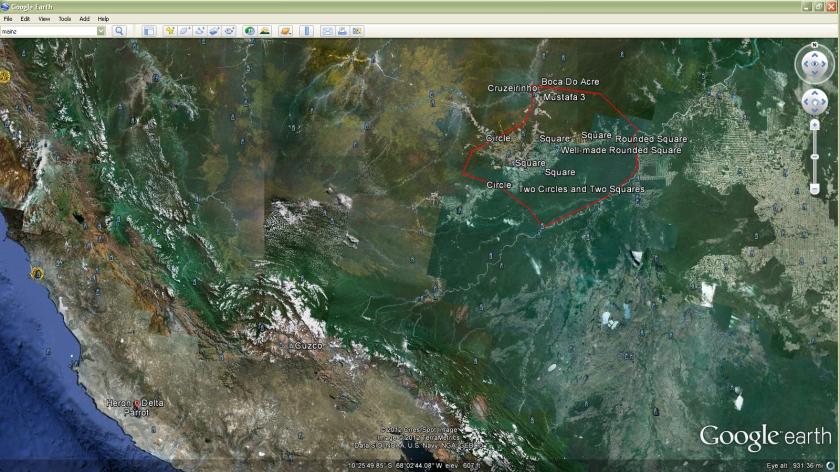 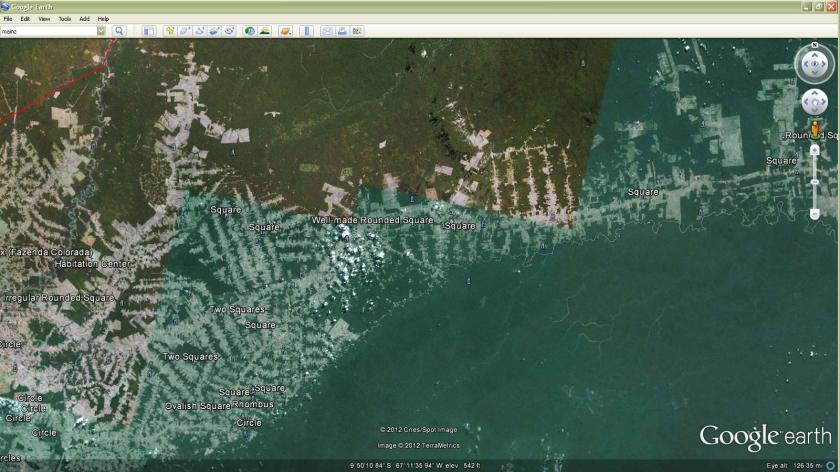 Most walls of squares measure between 10 and 240 meters in length, and most diameters of circles are about the same size.

It is well agreed that after Sargon II’s Tartan conquered Ashdod in 711/12 BC, he made it an Assyrian province, which, likely during the 704-1 BC revolt, once again became a vassal kingdom. Tel Mor, the most likely candidate for pre-Persian Ashdod-Yam, was destroyed. According to Finkelstein and Singer-Avitz, Ashdod proper, though not utterly destroyed in 711/12 BC, steadily declined to abandonment by the early 7th century BC. Ashdod may, as suggested by Finkelstein, have been moved to Ashdod Yam/Qal’at al-Mina. An Assyrian palace was built just NE of Ashdod proper. 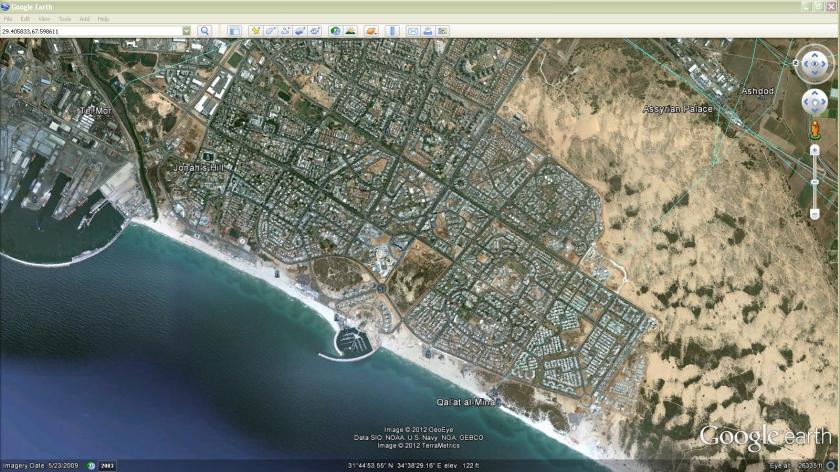 According to recent excavations at Jonah’s Hill, an Assyrian fortress was built there. These excavations could provide information on Assyrian architectural plans, pottery, ethnic and cultural composition, and purposes in fortress building.

Peter James describes the pottery of a 7th century Libyan Greek settlement of Wadi el-Chalig. Its plan is described here. However, when I look on Google Earth, I see this:

I see absolutely no remains of ruins. So, what happened to them?

The Indus Valley Civilization was a thriving civilization which was contemporary with Early Bronze III and the Intermediate Bronze in Canaan. It is well known to have been known in Sumer as Meluhha. By far, the most stunning elements regarding this civilization are its size, fantastic wealth, and its lack of fortifications during its mature phase. Now, it is well known that in Sumer, which was not unified until the Akkadian era, fortifications were an absolute necessity for a city-state’s survival. The fact the mature Harappan phase is characterized not by heavy, but by exceedingly light fortifications is a clear sign that it was not a culture of city-states, but one governed by a central government. However, it has been argued by anarcho-capitalists that it is precisely due to this lack of significant fortifications that it is unlikely a central government existed in the mature Harappan phase. Of course, this is a highly unlikely proposition. Did a private contractor build the streets of Mohenjo-Daro? Did a businessman design the Great Bath? The idea the cities of the mature IVC were dominated by oligarchies of merchants is somewhat more plausible, but does not explain why these oligarchies might not compete against each other territorially.

When one looks at the archaeology of the Early Harappan phase, one finds that Mohenj-Daro grew at the expense of cities such as Kot Diji and Amri. One also finds that as the Mohenjo-Daro culture expanded, the fortified site of Kom Djiri was destroyed. One also notices that Harappa had a citadel.

Some excavations were conducted just to the West of the Western Wall Plaza in Jerusalem. The excavation area was in the Tyropoeon, close to the boundary of the city. The results are available here for a limited time only. After some use of the area as a quarry, a 7th C BC four-room house was found, with seals and 10 lmlk handles (1 Hebron, 2 Socoh), and eleven concentric circle handles. It was then destroyed by the Chaldeans without fire. No further remains were found until the Herodian era, when a cistern, the remains of the aqueduct, and a plastered installation, probably a mikveh, were found. After that, the remains of the Eastern Cardo, shown by coins and pottery to have been built in Hadrian’s day, not Eudocia’s, and possibly even before Hadrian’s 130 AD visit. This cardo was aligned with that of the Herodian Temple Mount.

Update (August 20, 2012)-It looks like I was wrong about my hunch about the First Wall. It seems that a section of the Hasmonean city wall was converted into Wilson’s Arch.