A new book has come out (see this review) arguing the southern tripartite buildings at Megiddo Stratum IV (see Chronology page) were stables. I have no problems with this conclusion, however, the function of those tripartite buildings which are pillared as bazaars (as originally argued by Bliss) is virtually certain.

ABR has posted an html copy (with color pictures!) of  “Dating Jericho’s Destruction: Bienkowski is Wrong on All Counts” as of 4:14 PM today. Does someone at ABR actually read this obscure blog (see last post)?

Right here. The main conclusion I could gather from the articles was that pottery dating is a tricky business, and, since local pottery of the Middle Bronze IIC and Late Bronze I is extremely similar, some other dating method, such as radiocarbon dating, should be used to determine the destruction of an MB IIC/LBIA site. Fortunately, the dating has been done, on very reliable samples (charred short-lived grains), and has demonstrated that Jericho City IVc was destroyed before c. 1500 BC (though probably after c. 1550 BC).

The last city at the Lower City of Hazor, Lower City 1A/Upper City XIII, was destroyed with a great and mighty fire. Both Egyptian and Canaanite statues were defaced by the destroyers. According to Israel Finkelstein (TBU, p. 90), Hazor Upper City XIII was destroyed in the mid-13th C BC, since no late 13th Century BC forms were found at the site. This excludes an Israelite cause of Hazor’s destruction since the Israelites were, in Late bronze IIB, nomads, and had not yet even begun to settle by Hazor XIII’s destruction. The Egyptians could not have done it, since they would certainly not have defaced Egyptian statues. No Sea Peoples invasion is mentioned as early as the mid-13th century BC, thus, the Sea Peoples were certainly not the cause of the destruction of Hazor XIII. This leaves us with the ‘popular revolt’ hypothesis and the hypothesis Hazor was conquered by Canaanite armies. While no evidence of weaponry was found in the destruction of Hazor, and the defaced statues are certainly consistent with the idea of a peasant revolt, . Besides, the most appropriate approach for any army attempting to attack Hazor would be from the southeastern side (near areas P and N in this map), which has been insufficiently excavated to draw any conclusions regarding whether a battle took place there at the destruction of Hazor XIII. After all, Hazor was located on the western end of a series of ‘great powers’ in the Bashano-Syro-Canaanite world which could afford to launch a unified campaign against a city-state, especially one as vulnerable as Hazor (cf. below):

Hazor is in green, the Cities of the Garu (allied with Ashtaroth) are in light purple, Ashtaroth is in Purple, Damascus is in blue and Yenoam (under Damascene influence) is in light blue. The reconstruction is based on the Amarna letters, from the century before Hazor XIII’s destruction. It is clearly not too implausible to imagine an alliance of Ashtaroth and Damascus destroying Hazor, especially since Canaanite city-states were free to expand and maintain territory (cf. the rise of Amurru, Pella’s help in the quelling of the revolt of the cities of the Garu in EA 256). They would likely have no problem with destroying Hazor’s Egyptian statues. Thus, either popular revolt or attack by other Canaanite city-states would be sufficient explanation for the destruction of Hazor XIII.

UPDATE (as of April 5, 2012)- A peasant revolt hypothesis is now considered by me to be more likely than coordinated attack. Many residential areas of the Lower City were not destroyed at the end of Hazor XIII.

According to the March 2011 report of the Italian-Palestinian excavations at Jericho, a comment is made that

This comment has enormous relevance for the historical accuracy and origin of 1 Kings 16:34 and the Elijah-Elisha cycle. According to Kathleen Kenyon and Walter Mattfeld, Iron Age Jericho did not exist before its expansion after the Sennacherib campaign. The statement above, while not absolutely conclusive (i.e., published and explained clearly and officially), certainly does support the idea Jericho was, in fact, founded in Ahab’s time.

I have blogged about these geoglyphs before. Someone else might have discovered these, but, if there is no claimant, than I am the one who gets credit. 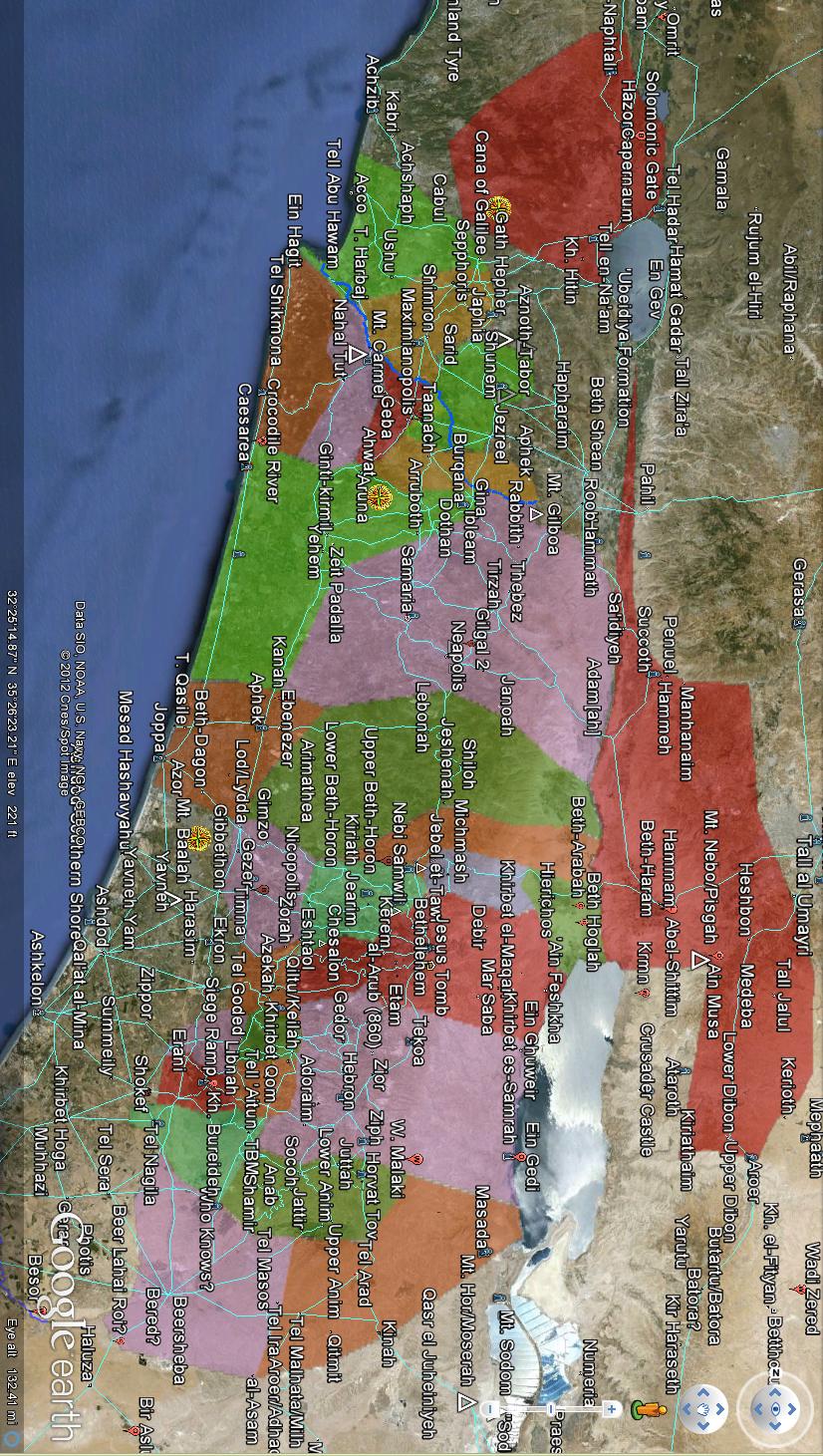 Bart Ehrman has recently written an article on the Huffington Post (find it yourself) arguing for the existence of the ‘Historical Jesus’. He starts off by illegitimately comparing those who deny the character with obvious crazies (Holocaust-deniers and birthers). This is a dangerous logical fallacy, and a stupid one, when uttered by one as skilled in his field as Ehrman. One might as well compare deniers of the Bible’s creation myth with the deniers of the efficacy of vaccines or global warming. Ehrman then continues by attacking what many of the better Jesus ahistoricists (Carrier, Godfrey, Doherty) would likely consider fairly weak or insufficient evidence for Jesus’s lack of historicity. Of course, citing D. M. Murdock (a New-Ager, not a Skeptic) scores nobody credit. See my “Debunking Vulgar Jesus Mythicism” link in the sidebar for a good debunking of her nonsense. It is true that there are only two mythicists (Price and Carrier) with PhD’s in a relevant field. However, minority ideas should not be suppressed simply because they stem from a minority. They should be suppressed because they flatly contradict the good evidence we have. Ehrman does not do that in his piece. He debunks many of the stupider arguments made by ahistoricists, but hardly even bothers to do so with one of the most misleading (the parallels with exotic pagan gods).

His statement that “With respect to Jesus, we have numerous, independent accounts of his life in the sources lying behind the Gospels (and the writings of Paul) — sources that originated in Jesus’ native tongue Aramaic and that can be dated to within just a year or two of his life (before the religion moved to convert pagans in droves). Historical sources like that are is pretty astounding for an ancient figure of any kind. Moreover, we have relatively extensive writings from one first-century author, Paul, who acquired his information within a couple of years of Jesus’ life and who actually knew, first hand, Jesus’ closest disciple Peter and his own brother James. If Jesus did not exist, you would think his brother would know it!” is filled with lies, and Ehrman certainly knows it. James is not described in the Bible as a “brother of Jesus”, but as a “brother of the Lord”. While this could mean “brother of Jesus”, it could as well be a religious title bestowed on numerous men. The fact we have numerous independent accounts of Jesus shows his historicity no more than the fact we have numerous independent accounts of Zeus, or any other other fictional figure.

Erhman also fails badly with his ‘but no one would make up a crucified messiah!’ argument, ending up sounding like Josh McDowell in the process. A belief in a purely echatological Messiah would die out fairly quickly, since there is no supernatural, and thus, the prophesied Messiah would never come. One who came secretly, without a great announcement, but who managed to be, ironically, an important theological plot point, would be much more appealing to the people of the Roman empire, largely due to his lack of falsifiability and the fact it makes one secure to believe that the Christ had already come. The parallel of crucifixion to animal sacrifice would make the belief even more appealing. Being first in a line of beliefs does not make a belief have any more credibility.

In short, Erhman commits the sin of lying to the public and presenting not a single good argument for his conclusion. The fact he poisons the well by alleging that most Jesus ahistoricists are anti-Christian is an obvious bit of stupidity, considering the existence of placatheism of the Michael Ruse and Karen Armstrong variety, which alleges many historical details in religious texts are false, but religion still has much good to offer to the world. Indeed, the ahistoricist Couchoud praised Christianity for the contributions it has made to advancing civilization (I would disagree; Christianity was the result, not cause of, the expansion of civilization).

However, I am saddened by the poor arguments many have made in this thread. False arguments include the ignorance of the Jewish context of Roman Palestine, where Christianity originated (cf. Epistle to the Galatians), allegations that Roman Palestine was ‘superbly well documented’ (it wasn’t), and the idea anyone but Josephus would mention any failed Messiah from Palestine. The ‘Q community’ was likely limited to a few unprestigious places in the Aramaic-speaking portion of the Roman Empire, and would hardly be mentioned by the leading intellectuals of the day. Other stupidities in the thread include arguing from the uncritical reading of the most fiction-filled parts of the Gospels to show that the ‘Historical Jesus’ of scholarship (an entirely different being from the Jesus of John or Matthew) did not exist, lying and misleading regarding Origen’s use of Josephus, and arguing that Paul’s likely deliberate ignorance of Jesus’s life demonstrates that the twelve apostles knew no physical Jesus the Nazarene.

In short, stupidities and fallacies of argument abound when arguing about Jesus’s historicity.

The Sahara is a vast, inhospitable desert. However, even in this barren wilderness lie oases. Among these are Takedda, Tadmekka, Tessalit, Ghat, Gudamis, Gharama and Morzuq, Aoudaghost, Ouadane, Araouane, and Touat. All these oases were once used to get from the Mediterranean world to the then-unexplored lands of the River Niger. Some of these are still isolated from the outside world except by camel caravans. Araouane, for example, is still a village in the midst of the dunes of only a few puddles and forty-five scattered structures! How anyone managed to discover it is a mystery. Taoudenni as well is a mystery; it has only two small clumps of trees, a few scattered ruins and three square buildings. How did anyone discover the ruins of Aoudaghost, where only a few small rectangular structures can be seen growing along a sizable amount of vegetation? 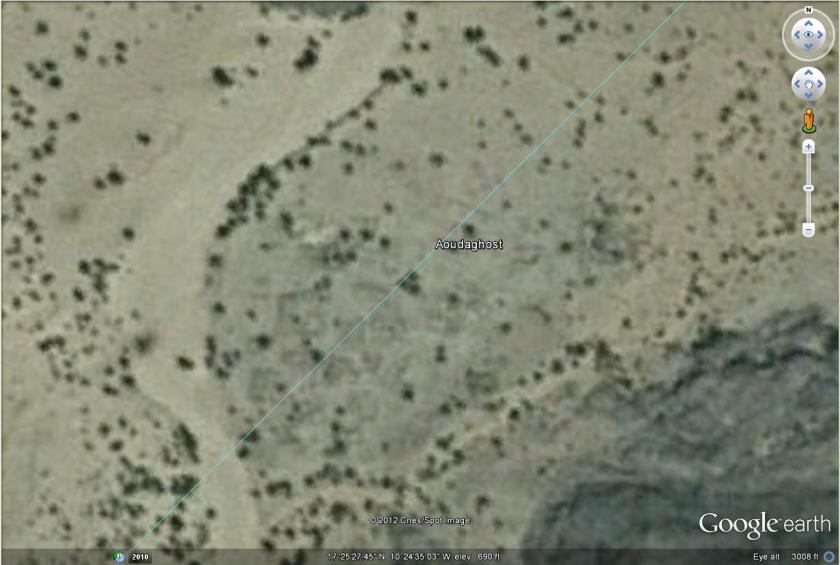 And what of Tadmakka, where numerous buildings were built and an excavation recently took place? 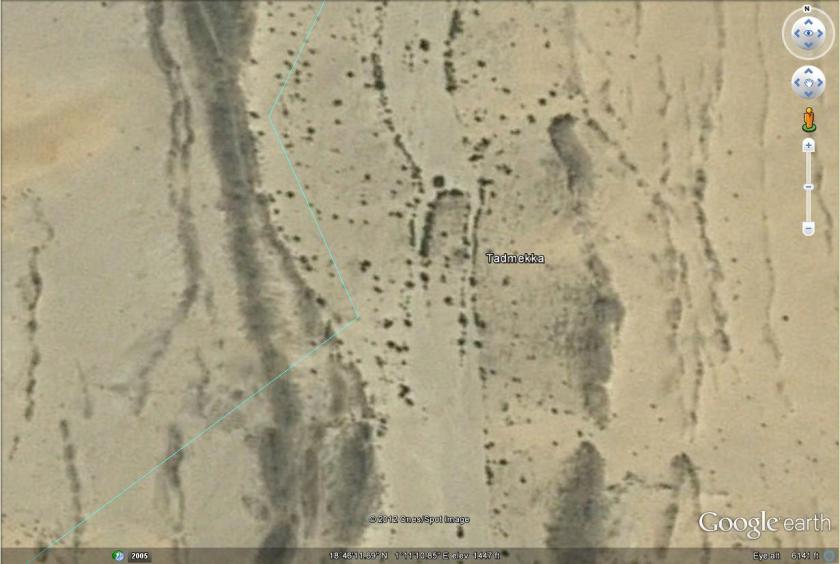 And what of the crescent-shaped burial mounds in the western Sahara researched by Nick Brooks? What settlements are correlated with them? What is their chronology? What geological features are associated with them? Clearly, numerous opportunities for archaeological continue to exist in the Sahara.