So, I decided to watch the film “Religulous“, starring Bill Maher. A good portion of the statements of the faithheads are cringe-worthy. The statements I’m focusing on here are those of Francis Collins, accomodationist ordinaire, who has been cited by many Christian apologists, especially those who pretend they aren’t Christian apologists and don’t take http://xkcd.com/774/ to be satirical, but take it as a serious guide to behavior.
Transcript:
Maher: Now here’s what’s so puzzling; is that you are the one scientist, the one famous scientist, anyway, who’s also religious. Explain that to me.
Collins: I would argue that if you look at the evidence, the historical evidence of Christ’s existence is overwhelming.
Maher: What evidence? I mean, I’ve never even heard anyone propose that there’s evidence…
[cutaway]
Collins: When I read the New Testament, it reads to me as the record of eyewitnesses who put down what they saw…
Maher: -You, you, you know they weren’t eyewitnesses.
Collins: They were close to that. They were…
Maher: -No.
Collins: Within a couple of decades of eyewitnesses.
Maher: Okay. Would that stand up in a laboratory as, as, absolute, foolproof evidence that something happened?
Collins: You are setting up a standard for proof that I think would really be an almost impossible standard to meet…
[cutaway]

As this is the only glimpse of Collins the director offers us (except for a bit of discussion about Mark&John not including the Virgin Birth in their narratives), it is difficult to make too much of this brief glimpse. However, we could also look at the brief pages 222–225 of Collins’s volume of Christian apologetics, The Language of God: A Scientist Presents Evidence for Belief.

In fact, here’s a screenshot of the most relevant page for purposes of commentary and criticism: 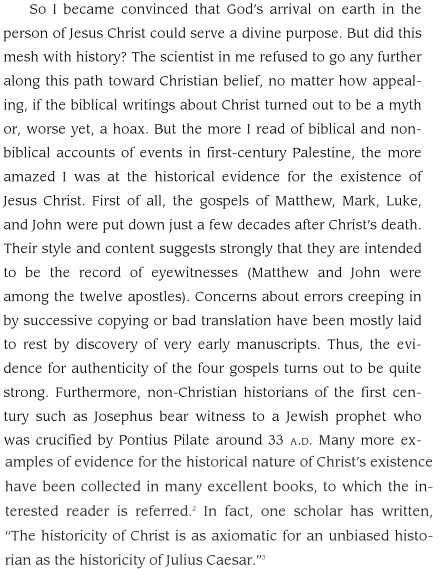 -Let us start with the interview. Collins states that “the historical evidence of Christ’s existence is overwhelming”. In fact, there is no independent evidence of Jesus’s existence outside the New Testament and a few Church Fathers. All the records of Jesus Christ 1st-2nd century C.E. non-Christian Roman historians record must necessarily have derived from the accounts of Christians-was anyone seriously going to check the penal records of a pile of ash, rocks, and grass? Apparently, Collins does not understand that sources yesterday worked like sources today. Also, all of Paul’s statements about Jesus are fully compatible with an understanding of Jesus as a channeled figure. The authentic Pauline epistles do not indicate Jesus had much of a life before his earthly death. I wonder what kind of eyewitness records have Matthew 4:1-11/Luke 4:1-13 in them. What kind of eyewitness records have Mark 16:8 in them (or, for that matter, the rest of Mark 16, not counting forged endings)? What kind of eyewitness records have suspiciously exact prophecies (Mark 13:14≈Luke 21:20, the “abomination of desolation” being the Roman army or Roman aquila) with phrases like “let him that reads understand”? Bill Maher is 100% correct that the Gospels are not eyewitness records -they are pious fictions. Maher’s standard for proof is also perfectly reasonable –extraordinary claims require extraordinary evidence. Collins’s starting assumption that writings describing extraordinary events but not explicitly describing the occupations of their authors (thus being essentially anonymous) should be exempted from being suspected fictions or forgeries unless proven otherwise (see the statement in the parentheses in the screenshot) is ridiculous. The “one scholar” is Christian apologist F.F. Bruce. In short, as described here, Francis Collins suspends his critical faculties while reading the Gospels, as does George Grena and the vast majority of Christians.