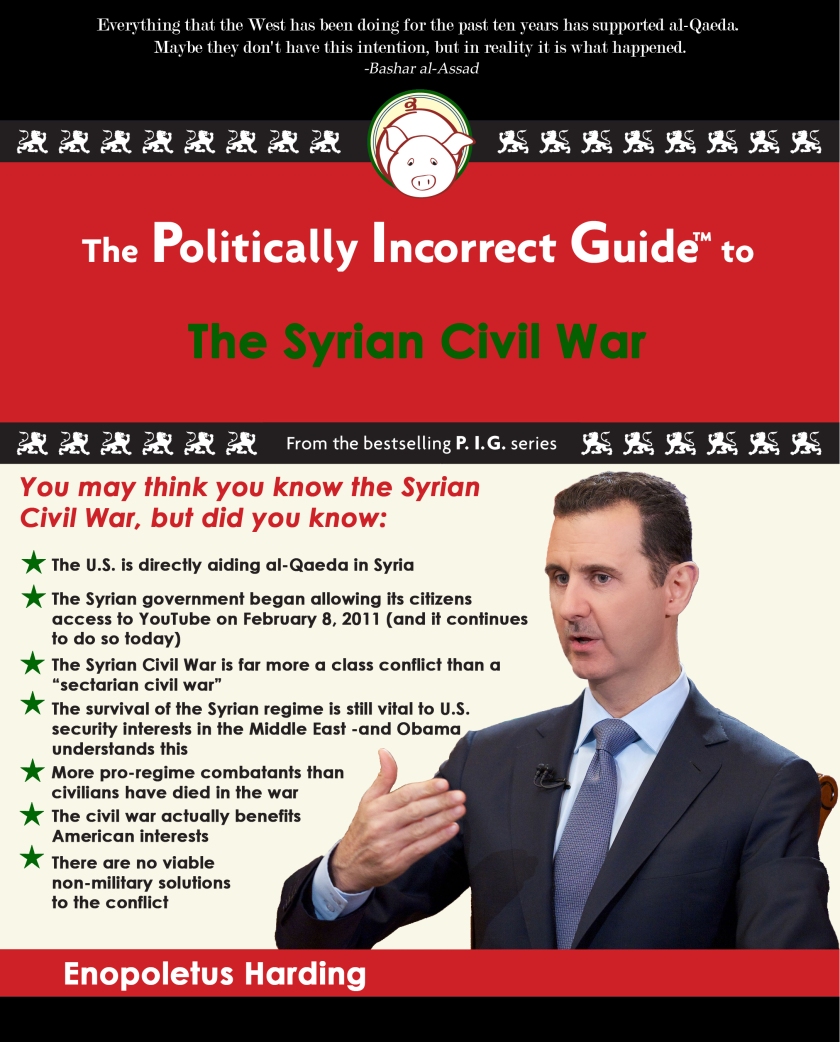 Fake book cover made by me based on this real one. Assad quote from here. Assad picture from here.

Points against the “sectarian civil war” interpretation and in favor of the “class conflict” interpretation: most urban Sunnis in Damascus continue to oppose the rebellion, the first organized rebel massacres of Alawite civilians only occurred in August of this year (and even these massacres were done by groups with at least a large minority of foreigners), most fighters in Aleppo are of rural origin. I do, of course, understand that there is a sectarian element to this war (e.g., most Alawites and Druze are pro-regime, most rebels are Sunni), but to characterize the war as sectarian is to miss a pretty big point. The sectarian violence done so far is nothing compared to what would have happened had the regime collapsed in 2011. The war did not begin because Sunnis hated Alawites, and it is not continuing because Sunnis hate Alawites.

On survival of the Syrian regime still being important to U.S. interests and Obama understanding this-see this DailyKos article. The continued survival of the Syrian regime is the only thing keeping thousands of fighters outside the countries from where they came from. If the regime falls, rebel fighters causing trouble outside Syria are guaranteed.

Points in favor of the claim that the civil war benefits U.S. interests: it has broken any Iranian dreams of becoming a major regional power, it decreases the militant Islamist threat in Iraq, it has distracted Syrian, Iranian, and Lebanese attention from Israel.

There are no viable non-military solutions to the conflict: this is self-explanatory. If the only provincial capital in which regime forces have been fully defeated is controlled by al-Qaeda, what more needs to be said?