An attempt to control the rates for call loans by the establishment
of an arbitrary limit at a low level, without the
ability to modify the causes above enumerated, which operate
to increase rates, would be distinctly hazardous, for
the reason that up to the point where the arbitrary rate
would limit the supply of new money, speculation and expansion
might proceed unchecked and the natural elements
of correction or regulation would not obtain. In
other words, high rates act as a deterrent to over-speculation
and undue expansion of credit. On the other hand,
should the supply of money available at a fixed maximum
rate become exhausted, liquidation might suddenly be
forced, because the demands for additional accommodation
for the consummation of commitments already made could
not be met. The effect of such liquidation would be to
embarrass not only investors and dealers in securities, but
frequently might affect dealers and merchants in commodities
as well.

“Over-speculation and undue expansion of credit” is the only thing holding up the present-day stock bubble in the United States. Graph below:

Since 1991, there has been less and less average stock market wealth per average dollar of margin debt on the New York Stock Exchange.

The ISIS begins surrounding Baghdad from the South and captures the Iraqi desert to reach the Jordanian border. The desert in Syria is much more difficult to capture as the Syrian military understands it to be an essential frontier between the non-government controlled Euphrates Valley and government-controlled south-western Syria. The desert serves no such function for the Iraqi government and can, thus, be used by the ISIS to carry out interventions in the Kingdom of Transjordan. Might Jordan stop aiding the Syrian rebels now? The desert does serve as such a frontier for Jordan as it does for Syria.

Obviously, the ISIS won’t capture Baghdad, but I’m leaning toward the possibility that it might assault the city. I am not taking the recent news of U.S. advisors having been sent to Iraq seriously, as Obama has been shown to be pro-ISIS through and through. There is no chance of the Iraqi government recapturing Nineveh within the next month unless the Kurds do it for them. 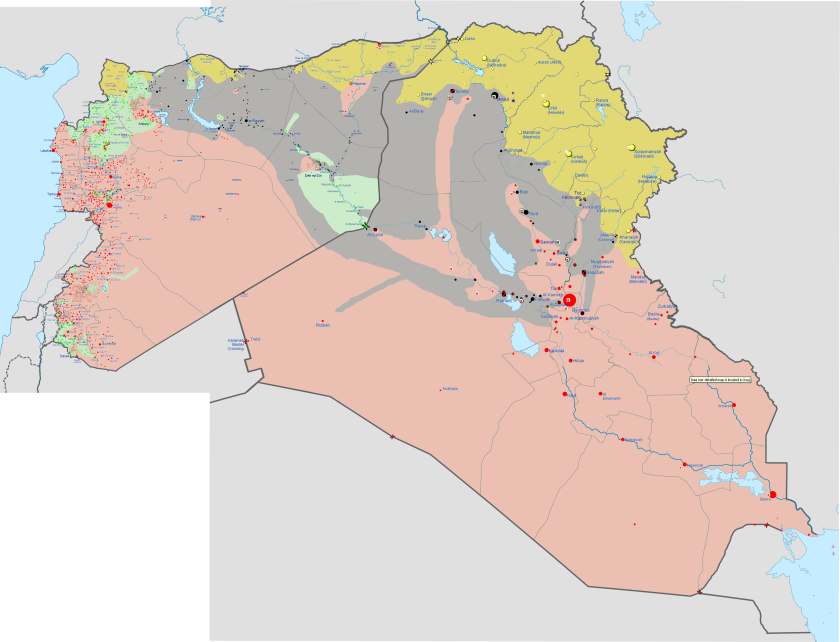 Baiji oil refinery recaptured by Iraqi government. The situation in the rest of the country seems to have stabilized. I barely had to make any changes to the map.

It is as I suspected- the Obama administration’s complicity with the expansion of the ISIS in Iraq is due to its mission to remove moderately pro-Iranian Prime Minister Nouri al-Maliki from power and install a more pro-Saudi Iraqi Prime Minister. The U.S. denouncements of the supposed sectarianism of Maliki (which is mostly not to blame for this recent ISIS expansion) are undeniably merely a smokescreen for conflicts regarding more fundamental economic interests. I do not know what these interests are at present, as that would require days of sifting through noise to find some hint of a signal, but I do know that they must exist and that information regarding them can almost certainly be found online. As a rule of thumb, a typical relevant Wikileaks cable is twice or more as informative as a typical relevant think tank or news article about events in the Middle East. Curiously, the mainstream media is much more comfortable with discussing fundamental economic issues (e.g., natural gas, European markets for Ukrainian goods) as they relate to recent events in Russia and Ookrayeena. This fact has been successfully satirized by an excellent Lebanese-born British Christian satirist. 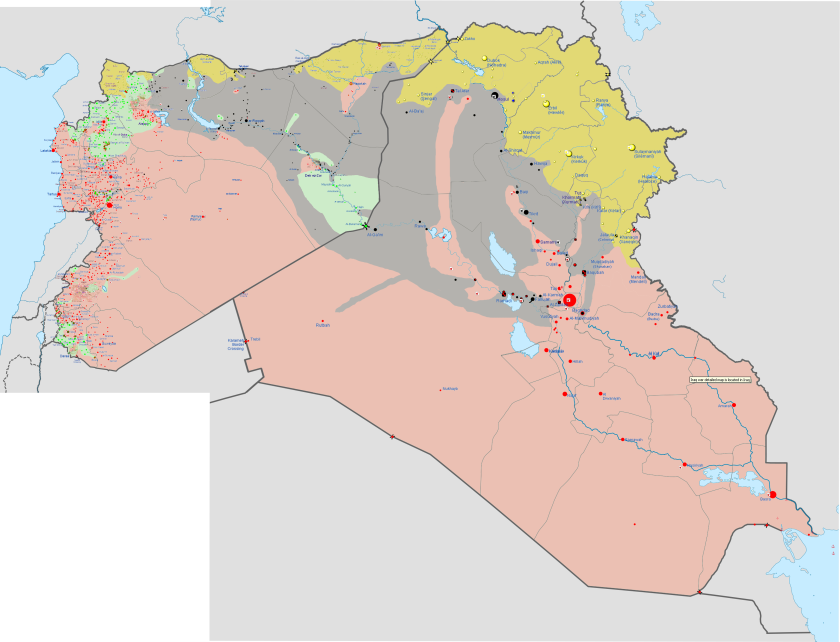 The entirety of the very enlightening book Experiments in Egyptian Archaeology is available online. One of its conclusions is that copper tubes, rope, wood, and dry sand are sufficient to create a drill that can create circular holes in granite. Read it! Then counter the pyramidiots!

From the same sources as in the previous post.

By popular demand and approval of the people, I give thee the below map of Syria and Iraq based on the same sources as used the day before yesterday, plus this one. I still have no clue regarding what’s going on at the Yarubieh border crossing. 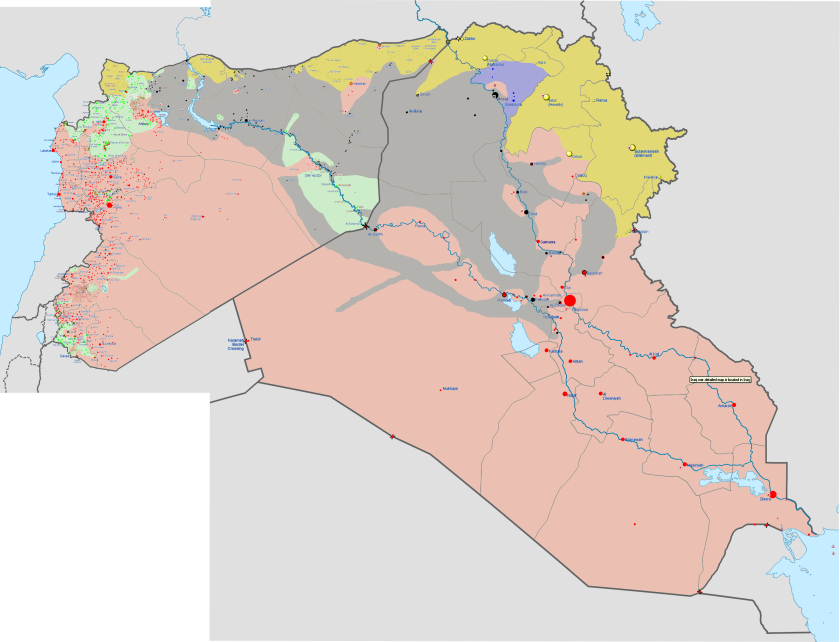 The U.S. State Department relishes pointing out that Assad’s regime does not bomb I.S.I.S. headquarters as much as it would if it were serious about countering I.S.I.S. This, I think, proves too much. There is a reason that thousands of people (including me) consider the rise and expansion of the I.S.I.S. to lie squarely on Obama’s shoulders. The fact I.S.I.S. headquarters throughout Syria and Iraq have not been destroyed by mysterious truck bombs is a testament to Obama’s refusal to do anything- fund rebels, send in anti-I.S.I.S. CIA, establish massive training camps for rebels just North of Tell Abyad, attack I.S.I.S. leadership with drone strikes, directly support the Iraqi army – to weaken the I.S.I.S. in any significant way. I feel queasy-sick even. Like the now-dead Antony Sutton, I feel like I’m one of a small few generally sensible people that understands that the U.S. is, whether directly or indirectly, supporting our what are supposed to be our greatest geopolitical adversaries. This understanding makes me rethink many things-up to and including 9/11 conspiracism, which I have generally dismissed as logistically implausible. I understand it is often best to attribute to stupidity what could be explained by malice, but the idea Obama is so stupid as to not understand that his foreign policy today is pro-I.S.I.S. is so inconsistent with his being smart enough to stand as to make that idea not worth considering in any detail. Mark my words: as we speak, a Jihadist state of the most vile kind is being built on the plain of northern Mesopotamia. Its future is uncertain. The only serious adversary it might attract in the near future is Iran. The U.S. is doing nothing whatsoever to counter it, and is even actively supporting the existence of an environment that allows such a state to exist. The territory of the state is vast in extent for a clearly illegitimate and internationally unrecognized entity. It is vastly more organized and dedicated than any of its present-day adversaries. Its predecessor came into existence in the aftermath of the U.S. occupation of Iraq; it thrives today with no thought of the return of such an occupation. At least one attack on Western soil has been committed by one of its soldiers. It is a threat to the security and freedom of American citizens. It is being indirectly aided by the U.S. government. The amount of worry one should have over this cannot be overstated.

The below map is a combination of this, this, and this map. The colored regions in Iraq are by me (and, thus, are not reliable) and are based on plausibility and this and this map. Made in Adobe Photoshop. Red is Iraqi and Syrian internationally recognized governments, black is I.S.I.S., yellow is Kurds, blue is Assyrians, green is Syrian rebels.

Now that the I.S.I.S. has captured Nineveh, one can be sure of two things -that the I.S.I.S. controls the fates of over two million people and that the vast supplies of antiquities in the northern Mesopotamian plain are at great risk of being looted and sold to Turks or destroyed for the cause of Allah and his messenger. It is probable that Nineveh will become like Apamea.